A few times, during this morning's slumber, my body reminded me of yesterday's 8 mile run, a stiff neck and some down and dirty core work.  I needed to calculate every movement when changing positions; my body was sore.  Before the alarm sounded, my eyes peeled open as my bladder called for relief.  I opted to get a move on to attend an early yoga class at a studio I've never been.

The warm space and inviting substitute welcomed me.  After exchanging pleasantries, I parked my shoes along the wall before finding a home for my mat.  I noticed, positioned across from me, a sad girl.  Oftentimes, she gazed into the distance, away from my mat, with a terribly sad look on her face.  Her eyes, barely opened, seemed to hold the weight of the world; the creases of her mouth hung down giving the illusion that her cheeks could not be held up by her upper jaw any longer.  I tried to ignore the girl, and most of the time I was successful.

Working in the boundaries of my own practice, I painted a picture on my mat; a work of art laced with challenges, breathless moments and a little sweat.  Every now and again, my eyes would reset on the girl.  She remained stone faced, her mood unchanging with the slow flow.  Distracted, I couldn't comprehend why she could not find the sunlight.  I turned my attention back to the remainder of the class, feeling the burn of the final poses.  I thankfully shifted into savasana, carefully placing a bolster under my legs for added support.

I gave myself permission to completely relax.  The mat loved my body back, supporting each inch.  I didn't think about that girl, rather my mind drifted to an unnamed place.  The time in savasana was short lived.  Within five minutes we were encouraged to introduce movement back to our bodies.  I hugged my knees into my chest, rocking side to side re-awakening the lower spine.  I rolled to my right side for a full breath before pressing myself up to seated.

In unison with the practitioners, I pressed my hands together in front of my heart, bowing my head to an audible 'Namaste'.  I folded over my lotus legs, dropping my hands forward onto the mat.  I raised my head, looking up towards the girl, but she must have left my view.  For a moment I couldn't find her.  As I rolled up my mat, she caught my eye.  With the mat tucked under my left arm, I looked back to see her image burned into the wood floor.
Posted by Unknown at 3:52 PM No comments:

If I could rewrite this, the morning would have been different.
The stars aligned.
The heavens opened.
The birds flew from under my feet.

I ran so hard that day - slow, but hard.
I gifted myself a challenge.  I had not run a trail since Quadzilla in July.  I missed getting lost like that.  The previous day, I made an impulse purchase on a pair of Brooks trail shoes.  After Quadzilla, my shoes (4 years old) were so trashed that I had no choice, but to throw them away — a bitter sweet moment.

It's not easy during the climbs; my pace drops dramatically.  I eventually find peace in the scenery and the sounds of my feet shuffling through the freshly fallen foliage.  This scene is all too dangerous considering what could lurk beneath the beauty — symbolism that kicks me in the face.  I wanted to fall, badly to get over that fear, but my will refused to let that happen.  I got high after the 1st mile; the blue skies pulsated beyond the towering trees.  I swear I lost my eyesight for some time.  The tunnel vision was incredible.  That place lets me focus on nothing but the placement of my feet.  She listens without judgement.  She welcomes me with open arms every time.

I stopped half way to rest my weary head on an inviting rock, jutting over the creek.  I looked up at the sky, vibrating pockets of blue tickled by the tops of the trees.  I looked behind me, dropping my head back, lifting my heart high in matsyasana (fish pose).  I breathed with my eyes soaking in the fresh air and crisp water. 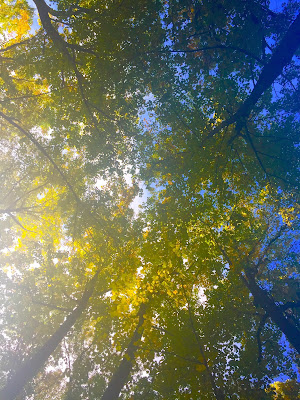 Staying mindful to the run, I picked myself back up to carry on.  I climbed the ridge, cresting at an opening, overlooking the city. 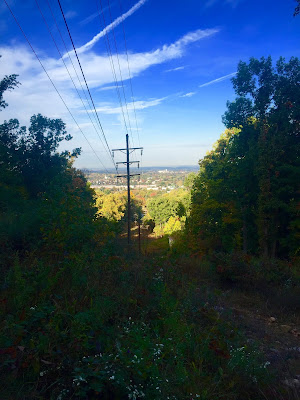 I paused here for a few reflective breaths before slinking back into the trees.  The remainder of the trail steadily drops which permits me to open my stride, picking up the pace.  I returned to the start, stopping at my car for a swig of water before taking the trail unknown to me.

The path supported my increasing speed.  I rounded the corner headed south.  The enclosed space poured onto a side street, reconnected by a boardwalk.  I hit the planks with such force, rattling the earth below.  I picked up the pace flying over the structure.  With each foot strike, startled birds escaped from their shelter.  I ran harder.  Like the parting of the seas, birds flew from both sides of the planks giving me the illusion that they were lifting me up.  I ran harder.

I believed I could go faster.  So, I did and I will. 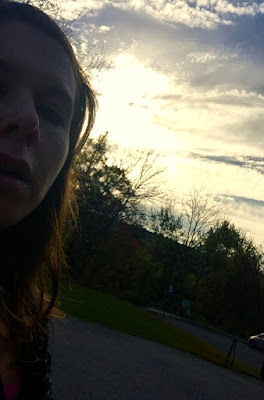 Prelude -
I drafted the majority of this post back on Sunday, October 18th.  I continued the story as if it was that day.  Time travel on Halloween...hmmm, sounds appropriate.
Happy Halloween!

I 'slept in' until about 7 am which is a remarkable feat for me.  I reached for my phone, checked the time and quietly slithered out of bed where I was immediately reminded I raced the previous morning.  My soles of my feet released after a few paces.  They were thankful for a slow start, one in which I wouldn't be running again.  My soul thanked me for the latest journey we'd embark upon - two months with no structured training.  The no training training could have had a different start had yesterday been unfulfilling.  I needed to get off on the right foot, so to speak; I'm glad we made that happen.

I spent four months training for a marathon that I lost.  I think I'm owning that now; moving on.  I envisioned a more smooth plan that cycle like the waves I so yearn to see.  But I, the hurricane, rolled in to disrupt the way, changing the course of things forever.  Post marathon, I failed to make sense of things further pushing me under water.  I just wanted to close my eyes and let the water wash over me.  Sometimes I could see myself sinking to the bottom, in slow motion, face up.  A small bubble in the corner of my right eye, looking towards the surface, reaching out, but losing touch.  Such a dramatic picture, but I grappled with the reality of my run.

Q: Why was I doing this to myself?
A: Not really sure.

Instead of drowning in my bullshit I did two things (in September):
1). I signed up for the New Jersey Marathon (May 2016), with intentions to try for a Boston Qualifying time...sigh, again.
2). I told my coach I was going to race the Runner's World 5K...sigh.

In the short few weeks leading up to yesterday's 5K, I had a few failed workouts as the result of being unfocused, but I pressed on (cause I'm a glutton for punishment).  I tried to make peace knowing that I love the road and what happens will happen and blah blah, insert all the bullshit cliches here.  Last weekend's girls' trip to Rehoboth invigorated me.  I didn't think about the run, or about the calories, or the drinking (well, I thought enough to KEEP drinking) or much of anything that tends to sneak into my pretty little head.  Whatever it meant, I was ready to race.

The business of the week and evening before kept me distracted from Saturday.  The girls participated in the kids run at Steel Stacks and, as always, made mamma proud.  We picked up a later-than-usual dinner.  I ordered and devoured a not-the-usual pre-race dinner of spicy veggie drunken noodles.  After the kids turned in, I carefully gathered my gear, laying out what would be a flat Muff representing Team Oiselle for the first time. 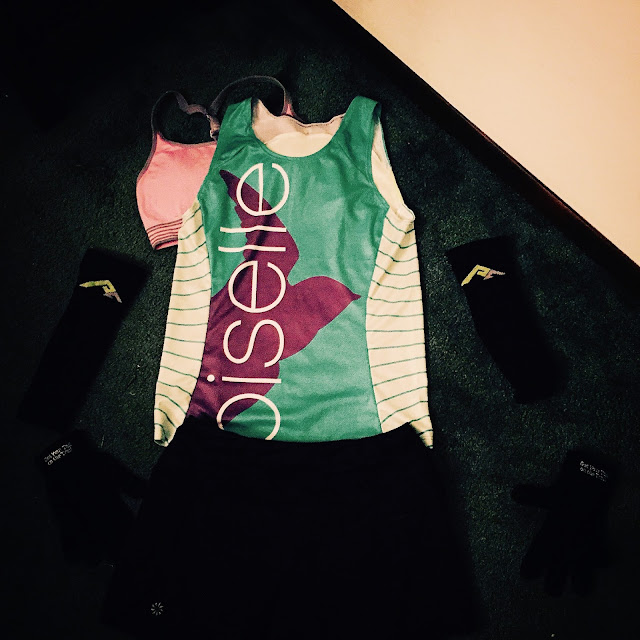 Aside from the usual rituals the morning of, I was prescribed a 30 minute warm up, peppered with short bursts of speed work to prep my legs for the work.  Three and a half miles later, I bundled up headed for the warm building with my hot tea in-hand.

I connected with a few Crazies for chatter while stretching out my hips and legs.  I sensed us all take a deep breath knowing that this was another silent moment for us.  Staying tough, we hugged it out and went our separate ways.

I'm not fast, but I'm fast for me.
I don't toe the line, but I get pretty goddamned close.
I snuggled in an open pocket, surrounded by a few intense athletes, giving off the air that they'd be gunning for a good time, too.  Although the sun kissed my skin, the low 40's air reigned supreme.  Following the tail end of the National Anthem I reluctantly removed my top layer, throwing it to the side.  My comfort was forever lost.

I pushed off at a steady pace, passing my car on the way out of the complex.  The sea of runners flowed over the bridge and up the biggest hill of the course.  Knowing this would be a short race, I picked off people on the climb, dropping my arms to release my shoulders and lift my heart.
I thought of nothing, but the run.
- sun on my face
- light on my feet
- breeze in my hair

On the return, I established the kick on the downhill and sustained that on the straightaway, knowing my pace would drop on the remaining inclines.  I climbed the final hill which lovingly transitioned into a downhill to the finish.  The course snakes alongside the casino, wrapping around the front of the steel stacks.  As I rounded that corner, a huge gust of wind fought me.  Ah, the hurricane reared its ugly head.  I charged through, pushing my face towards an eventual sprint to the finish.  My feet hit the brick paved path (the final few dozen strides of the race) at a sub-7 pace, topping out at a 5:04.  I promise you that everything went black.  I saw nothing; I heard nothing, but my breath and my feet hitting the radiant cubes.

I crossed the finish line just seconds from breaking my PR.

I needed about 30 minutes following to get my wits about me.  The runner's high encapsulated my physical and emotional body.  I walked on clouds, slurring my words to anyone who engaged me in conversation (not an unusual reaction for me).  With a smile, I jogged back to my car to get out of my clothes, pulling on a warmer, fresher set.

My 5K PR stands strong on a flat course.  Knowing that I came within a breath of knocking it down, on a hilly course, makes me beam with pride.  I set out to kick some ass and that's exactly what happened.  Accomplishing that goal to tie up my racing season helps set my mind at ease.  I have no solid plans, but I know it's going to be a tough road, requiring an emotional reset.  This is exactly what the universe has planned.

Posted by Unknown at 9:27 AM No comments: